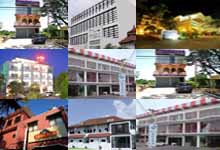 Nallur Kandasamy Temple is one of the popular places in Jaffna where lot of people visit here daily for to offer prayers to Lord Muruga. 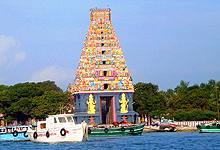 Nainatheevu is an Island with worshiping places which were built in the ancient times. It is called Nagadeepa in Sinhala.

Mannar is one of the important places in Sri Lanka, which is located in the Northern part of Sri Lanka and most of the Mannar city is surrounded by sea. This place is very important place for the Hindu religion followers as there is an ancient temple named Thiruketheswarm with Lord Siva and Parvathi is located here. Near to Mannar is another religious shrine is available for the Catholics and it is called as St. Mary's Church of Madu. Mannar is connected by road and railways. Earlier there was a ferry service that was running between India and Sri Lanka at that time it served as a gateway for the foreign tourists. This is a dry zone area and hot sun can affect your health. So take suitable measures to avoid the excess heat effects.

Recently Pope Francis Francisco; the 266th and current Pope of the Roman Catholic Church, did visited this shrine and held a Mass for the local worshipers in the Madu Shrine. For the annual feast of this Church, millions of people used to come over here and used to stay here till the festival ends. The Madu Church Administrators provide temporary shelter, and sanitary facilities during the Madu Shrine Festival.

Mean while lot of tourists come over here to see the dry lands and its shining sun, during their Sri Lanka Tours. There are lot of hotels and Guest Houses are available in and around the Mannar City. There are good roads and trains service that used to provide access to this land from Jaffna and Colombo. People living here used to speak Tamil, Sinhala and English. You can find good public and private bus services and private tuk tuk hire service to travel around this area. There are regular bus services to Madawachchi and Jaffna from the Mannar bus stand from morning to night.

Mannar is popular for its Arabian Baobab trees, that are now seen as another tourist attraction. There are lot of Donkeys wandering in the Mannar District. You too can find them on the streets. Their babies are beautiful, but don't try to touch them as their mothers are aggressive ones.